A downloadable tool for Windows

...an alternative to the overpriced everyday art CAM software that does nothing other than run-of-the-mill CNC work. PixelCNC is on the scene and growing fast as a powerful CAM solution for sign-making, engraving, artistry, DIYers, makers, and hobbyists alike. Welcome to the quick-and-easy utility that enables users to generate, edit, and composite together images, vectors, models, and text while offering a growing library of carving and milling operation types that are capable of generating both your tried-and-true cut-paths as well as all-new novel cut-paths, providing users with the ability to create projects with a variety of unique stylizations not achievable elsewhere. Relief carvings, V-carvings, halftones, we got it all - and more never thought possible.

CAM Innovation: Utilizing original and unique algorithms conceived by a veteran innovator and programmer, PixelCNC transcends the antiquated strategies and conventional manufacturing techniques fundamental to all CAM software in existence. Toolpaths are generated from a project "canvas" - the virtual workspace within which users position, scale, rotate, and edit their existing images, vectors and models, or create them from scratch. Trace imported media into editable vector-paths from which a variety of different geometry and shapes can be generated to be composited into a project's design. A variety of toolpath types can be generated on a mid-range PC or laptop within seconds and G-code can then be exported for virtually any CNC controller via the built-in post-processor system. If you find yourself in need of a 'post' for your specific CNC controller the simple text post-processor makes it a snap to modify an existing one to produce what's expected by your controller - or you can always request we make one for you. Let us know what CNC controller you're using and we'll be able to produce a working post for you in no time.

CNC Simulation: A powerful built-in simulation system provides users with a preview of the cuts that they can expect from their generated toolpaths. No more 'cutting blind' the way that some toolpath-generation programs expect users to. At best these programs only display a render of generated cutpaths but with PixelCNC users have access to a live preview of their carving operations' simulated effect on a workpiece, long before hitting cycle start, saving time and money.

At the end of the day: PixelCNC is fast, intuitive, and features a concise user interface that's designed to minimize complexity and maximize productivity. It's specifically designed to be the perfect CAM utility for creative DIY'ers who use a CNC mill or router to fabricate artistic works for fun and/or profit. Gone are the days of fumbling around with complicated obtuse software engineered by those with experience exclusive to manufacturing alone. PixelCNC is built from the ground up by artists with professional precision-CNC fabrication experience to be intuitive and easy to use for artists - without all the unnecessary complexity of professional CNC fabrication that's inherent to other CAM software (even those that bill themselves in any way as "Art" CAM software).

Instead of toolpaths serving only to remove material from where it shouldn't be, PixelCNC's philosophy is to exploit the very nature of CNC itself to provide visually stimulating and interesting textures and patterns to works which would otherwise be practically impossible with conventional CAM software ...along with your usual V-carving and relief-work too...

Maybe you've already found something that does what you need and were able to pay for it in full to own it outright. CAM software is designed almost exclusively to produce toolpaths whose merit is their function, not their form. PixelCNC's novel one-of-a-kind stylized toolpath operations, such as the chevron, labyrinth, and conformal operations - to name a few - are that which could be artistically integrated and incorporated into the design and aesthetic of your own CNC creations. PixelCNC's unique stylized toolpaths are alone worth its price - and more operations are always being invented and implemented all the time. Existing PixelCNC customers get these new toolpaths and all future features/enhancements that become become available for free.

For what PixelCNC can do its price can't be beat. There do exist a few different CAM solutions which have similar capabilities, and plain boring run-of-the-mill cut-paths, but most of these programs have too many options and features in many instances - which you pay for regardless. Conversely, they have only the basic features and want you to pay a subscription fee. PixelCNC is offered to users for just a one-time payment roughly equal to the cost of a month's subscription to one of the popular professional CAM programs, and users keep it for life while receiving new features and capabilities as they're introduced - at no extra cost.

Why PixelCNC? As a CNC hobbyist that runs an online craft shop with my wife by day, and writes code by night, I have grown weary of the usual tools and workflows for creating interesting works on our CNC machine. Existing CAM solutions are either too slow, boring, complicated, tedious, expensive, or some combination thereof. I needed a tool that makes creating toolpaths and generating G-code as quick and painless as possible - without all the fuss of professional CAM packages, or the shoddy performance and limited capabilities of most software - free or otherwise. PixelCNC not only makes creating toolpaths easy, it makes it fun too!

A downloadable free trial version of PixelCNC is available for user evaluation. It imposes a 20-minute time-limit per use session, restricts exported G-code to 4000 tool motions per carving operation, and the saving of project files is disabled. The free trial is otherwise equipped with the same capabilities of the full version.

Example images are available for users to download along with the free trial to test-drive PixelCNC's functionality and compatibility with their system before investing in a copy of the full version for themselves. If you experience any issues with PixelCNC - error messages, bugs, crashes, compatibility issues, etc.. please let us know via the message board at the bottom of this page! Our number one goal is user satisfaction, so if there's anything you're having issues with please don't be afraid to let us know about it.

At least one older version of PixelCNC is kept online in the event that something has become broken with the latest version for any users. PixelCNC is alpha software that is still being developed - with new features and functionality being released every few weeks which has not been fully tested. PixelCNC users are always at the cutting edge of its development. If the most recent version results in problems that make it unusable it is recommended that you try the provided earlier version and let us know of the situation via the messageboard (at the bottom of this page).

Vanilla run-of-the-mill toolpaths originate from industrial fabrication and its no-nonsense methodologies. They're a product of manufacturing and ingenuity rather than that of artistic creation and expression. While PixelCNC's ever-growing library of carving operations does happen to feature your conventional "toolpaths-of-industry" it also features totally new and original toolpaths which will set any project apart from those created using any other CAM software in existence. Machining "tool marks" are a thing of beauty unto themselves to be exploited by true artists, and your industrial-fabrication-centric toolpaths can only get you so far in that regard - forcing artists to sand and polish away something they wouldn't have to if they had more control over the generation of cutpaths themselves.

New and original operations and toolpath-generation algorithms for producing unique textures, patterns, and novel interpretations of a project canvas are being added all the time to PixelCNC, making it the ultimate CAM software for the truly creative hobbyist who wishes to set their work apart from those of street-side sign-makers at fairs - and the thousands who've saturated the likes of online markets such as Etsy and Ebay - whom all rely on CAM software to generate their toolpaths that that will never be able to do the things that PixelCNC enables users to do. 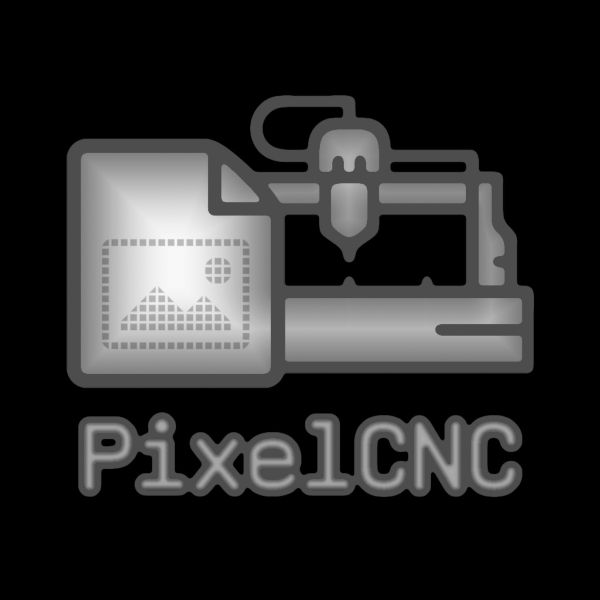 Using the image shown above the following images illustrate the toolpaths that can be generated with PixelCNC's current set of operations. (Note: images depict both generated toolpaths and CNC simulation views blended from lower-left to the upper-right) 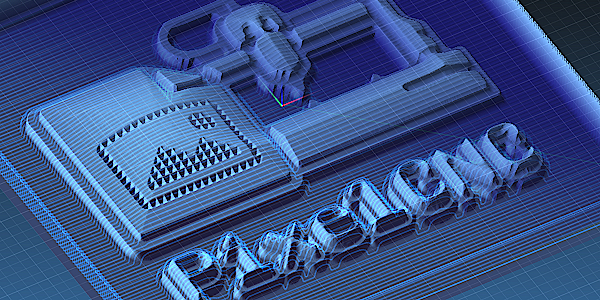 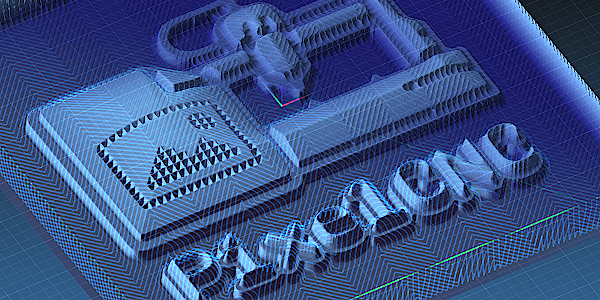 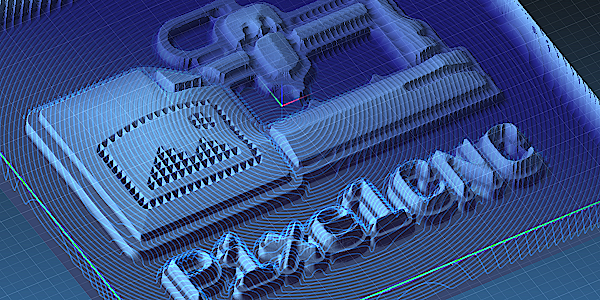 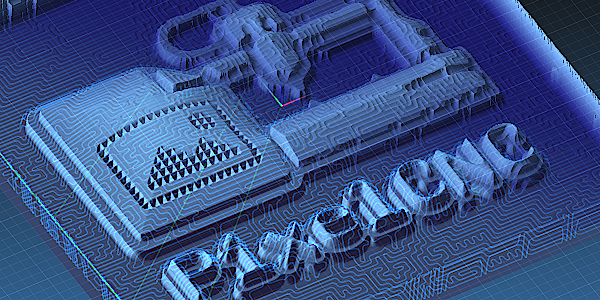 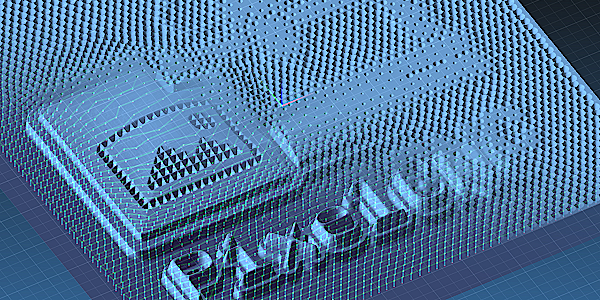 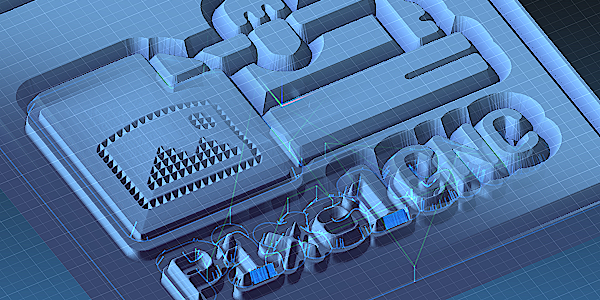 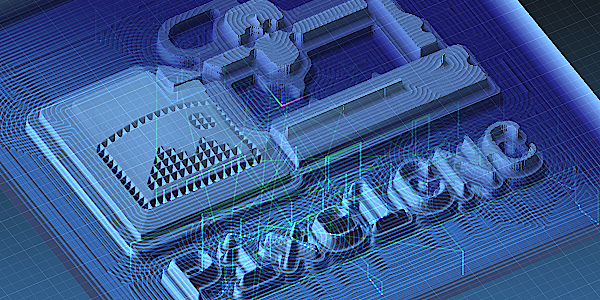 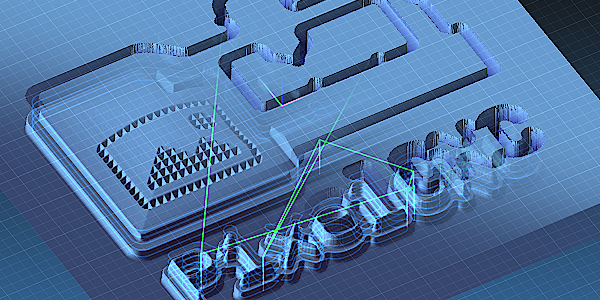 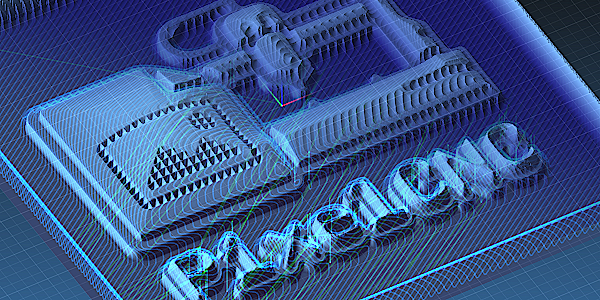 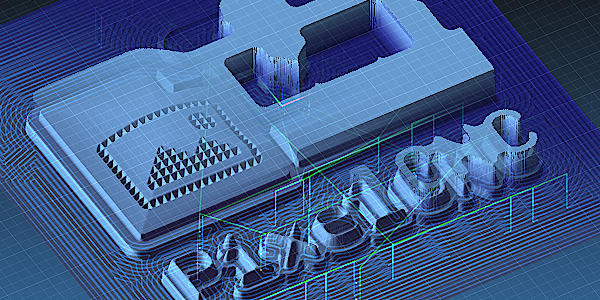 While PixelCNC is still under development existing customers receive updates which include bug-fixes, interface improvements, and optimizations. As a show of appreciation for customers' support they are also granted all of the newest features and capabilities as they are implemented: new operation types and toolpath generation modes, simulation system improvements and enhancements, and more - free of charge!

PixelCNC has been under development since 2017 and remains under active development. There are plenty of items left on the development roadmap which are being worked on - including functionality to add, change, and improve as well as new features to make PixelCNC more powerful, versatile, and easier to use. Maintaining an online presence that includes this store page and fielding tech support questions is a project unto itself, which does take away from PixelCNC's actual development. However,  even while still technically incomplete, PixelCNC is already a valuable tool of significant utility that is worth making publicly available to CNC hobbyists and pros alike. In the meantime inquisitive minds can follow PixelCNC's development via Twitter: @BITPHORIA and Minds: @deftware

New capabilities and features that are added to PixelCNC - increasing its value and utility as a tool - are accompanied by incremental price increases. Buy your copy now while PixelCNC still has it's early-access price-tag and you'll be receiving these new features at no extra cost as they are introduced with each new update!

PixelCNC has been tested to run on 64-bit versions of Windows 7, 8.1, and 10, without issue. PixelCNC should be run on Windows 7 or newer. PixelCNC will technically work on Windows XP (Service Pack 2) but it relies on OpenGL 2.1 compliant graphics hardware, and a lot of graphics hardware from the days of GL2.1 does not adhere to the specification - claiming to support 2.1 while missing features and functionality that the vendors assumed nobody would miss, which users probably didn't at the time. The implies that just about any computer built in the last decade should be capable of running PixelCNC. If you have any problems please report your experience via the messageboard at the bottom of this page and we'll do what we can to get you up and running!

The 32-bit version of PixelCNC is offered as a fallback version for users limited to a 32-bit version of Windows. The 64-bit version is recommended for all other users as PixelCNC's algorithms can be rather memory-intensive. This can result in using up the allotted memory that's made available to PixelCNC when working with complex projects that have numerous cut paths. This is usually about a gigabyte of memory regardless of how much physical memory there is installed in the system. The 64-bit version of PixelCNC is not limited in the amount of system memory that it can utilize, and will not exhibit memory allocation errors when working with complicated projects. 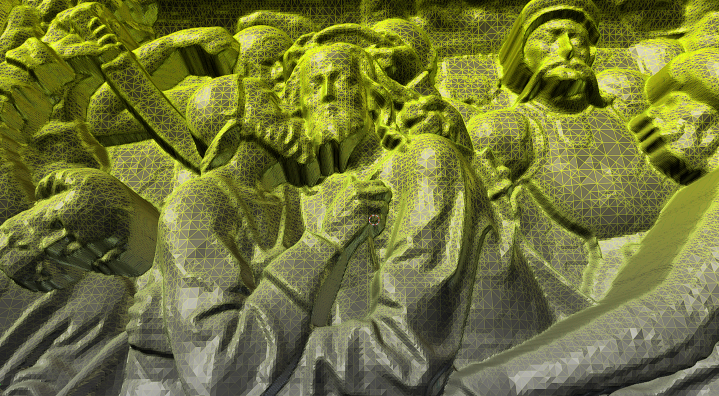 The triangle subdivision threshold can be specified via the command-line, or a simple batch file that you can drag-drop your TGA heightmaps onto and have TGA2STL spit out a usable binary STL mesh file. TGA2STL is also on GitHub, as free open-source software. Check it out! https://github.com/DEF7/TGA2STL

In order to download this tool you must purchase it at or above the minimum price of $175 USD. You will get access to the following files: