This is a small update to accompany the latest tutorial video that can be found on YouTube. Some bugs had been discovered while recording tutorial footage which are the primary motivation for the changes in this update being released now as opposed to later after more changes have accumulated. Here's the new tutorial video which explains some of the canvas editing features and demonstrates how to use them:

Some new controls have been added to the View Settings dialog which enable the user to control how their chosen colors are mapped to the heights of the canvas and simulation rendering. These sliders "bend" the function that maps height values which are used to interpolate between the top/bottom colors to control the influence each color has on the final rendered color. 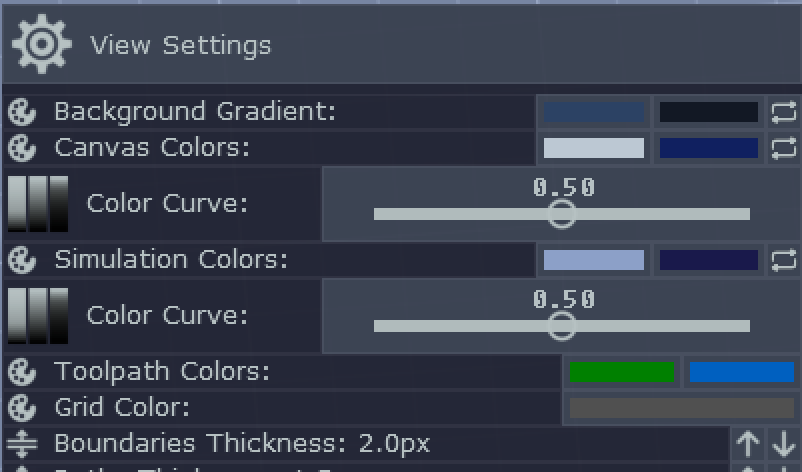 The main reason these were added was to improve visualization of stippling and halftone projects when viewing their simulated cuts. With the previous/default color curves it's hard to really get a good reliable sense of what cuts will actually be like when the top is a light color and everything in the cuts is a dark color, or vice-versa.

The example above shows the simulated results of a simple stipple project and what it looks like with a linear mapping of colors to heightmap values and with the slider cranked up to where the bottom color dominates the height value range to provide a much more accurate depiction of what a black-on-white stippling would look like (material surface is white, stipples are black).

More tutorial videos! The latest video is just the product of some of the recorded footage, the remainder will be used for creating another tutorial video. After that I'll likely work on a tutorial video which employs some of the canvas editing functions to craft a project and cut it out on a CNC, maybe a V-carving this time?

Also been thinking about actually getting to work on adaptive/trochoidal milling toolpath generation as well as an asset library which makes it easy for users to save/share both raster-layers and paths-layers with others in a communal database that's accessible from within PixelCNC. Having access to a library of assets is virtually invaluable.

Stay tuned for part 2 of the canvas editing tutorials where I'll be going into using the raster-editing functions in PixelCNC.