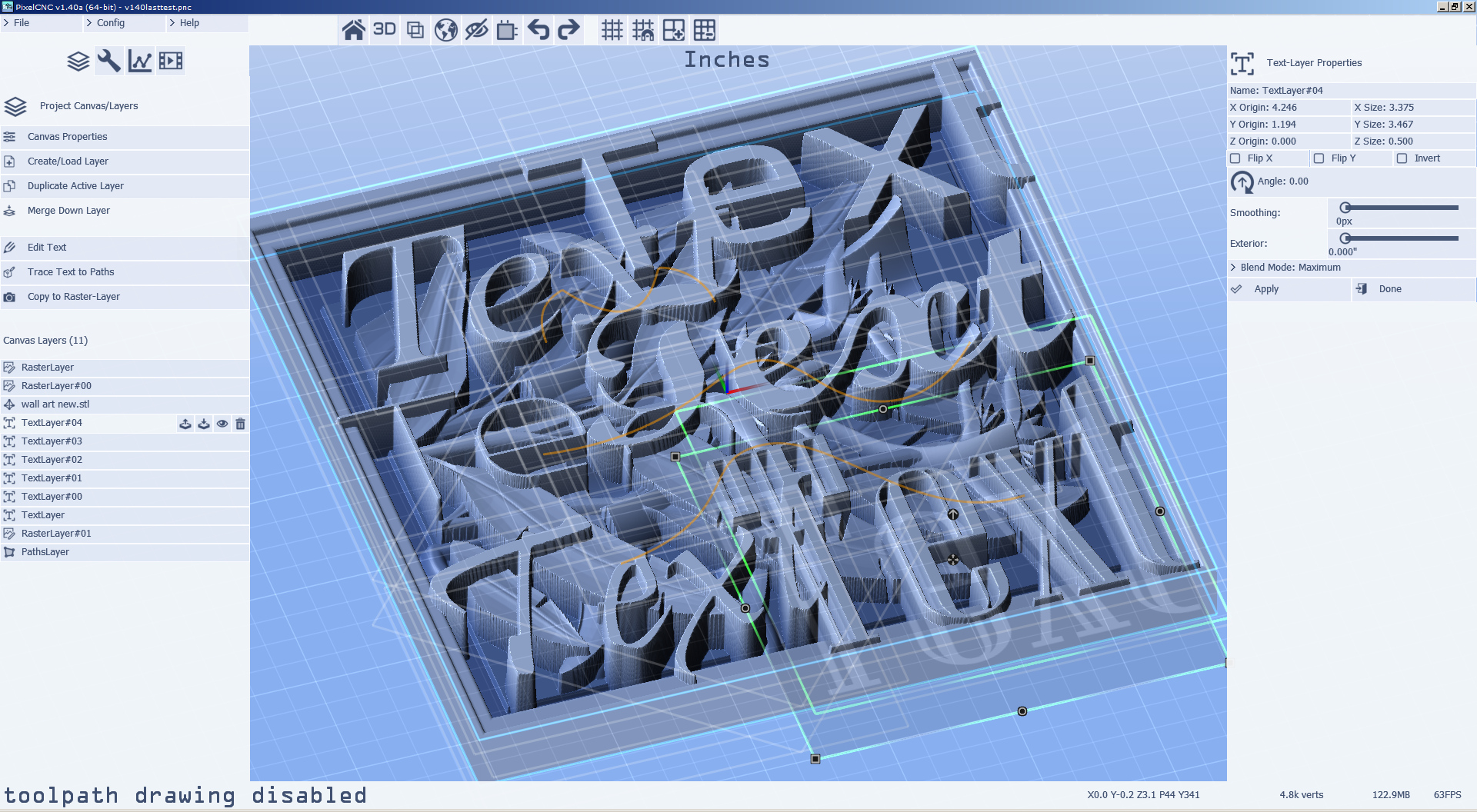 I've decided to start posting a screenshot of what PixelCNC looks like with a generic test-project open, so users can see the immediate differences in the interface that are not readily apparent when reading the changes.txt or following development via social media. At any rate, without fail, this update's change list ballooned to be twice as large as I had imagined it would end up being. Nonetheless, everything was necessary and was going to be done sooner or later. This update includes several new features, many changes, and even more fixes. Here's the changes.txt for v1.40a:

A generalized "event" system has been added to enable queuing and de-queuing of various data for users to undo the previous series of actions - or re-do undone ones. It hasn't been completely fleshed out yet with tracking the entering or leaving of layer editing modes but it does undo raster-edits, path-edits, and text-edits, along with any changes to the canvas or a layer's parameters. Now users can edit their raster/paths layers without having to worry about making mistakes!

Paths are no longer limited to creating 3D shape raster-layers strictly from closed-paths (i.e. angled, fixed-radius fillet, rounded). Now users can use open paths (not connecting back to themselves in a loop) as "profiles" which are extruded along one, or between two, "rail" paths. Here's a simple single-rail path-sweep, using a single path as both the starting and ending profiles:

Different sized/shaped profile paths are blended between too: 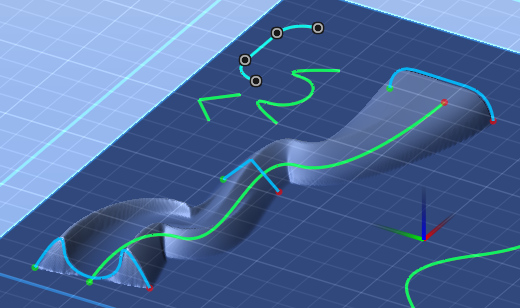 Double-rail path-sweeps allow profiles to be positioned per-rail. Although this allows for crossing profiles the result will not be exactly what one would predict as a profile's "point of maximum influence" on each rail is only for each rail, and not along the length of the profile when they are crossing. Instead, each output pixel's depth value is calculated from the four surrounding points on rails, and treated as a sort of quadrilateral interpolation:

Rail-paths have their start and end points indicated with green and red dots, respectively. For double-rail path-sweeps it's important that both rails start and end in the same direction. If a rail's path has its nodes in the wrong order users can simply toggle the 'flip' option shown next to the "remove rail" trashcan icon button:

Selecting paths no longer requires that users manually select individual paths or nodes one-by-one with individual left-clicks while holding SHIFT. Users can now draw a selection rectangle using a left-click-drag while holding down the SHIFT key when in path editing mode. When no paths are selected this will initially select only all of the paths which the selection rectangle happens to overlap - not requiring that the paths lie entirely within the rectangle (this may be be changed, or opened up to users to choose per their preference). If there is already a selection of paths then the selection rectangle will instead select all of the selected paths' nodes that lie within the rectangle.

The path/node selection behavior of the selection rectangle stands to be further refined, particularly to allow multiple groups of paths to be selected using separate rectangle selections - instead of only allowing the user to make a single selection of paths before they're limited to only selected nodes after the initial path selection has been made. Perhaps holding the CTRL and SHIFT keys will signify that more paths are being added to the existing selection of paths? More thought needs to be put into what the best course of action will be here.

All other means of selecting and editing paths/nodes are still in place and much of the conventions involved follow those of other popular software, path-editing or otherwise. Once users actually start playing with path-editing in PixelCNC it's really rather intuitive and quick to get the hang of. It will be especially pleasant once the undo system is capable of maintaining a user's previous selections and editing-state while in path-editing mode, and not booting them out of editing mode if they undo an edit. At any rate a built-in guide to assist users in knowing what their immediate options are while editing a paths-layer is planned for integration in a near-future release. In the meantime path-editing information is included within the User Guide and there's also a quick reference that can be accessed via the "Edit Paths Help" question-mark-icon button on the right UI panel for users to quickly determine what key presses and mouse clicks or drags they can use.

Previously it could be difficult to discern the vertical positioning of a layer just by its outlines. Now PixelCNC draws a set of lines extending from the bottom corners of the selected layer to the bottom-plane of the canvas, and from the top of the selected layer to the top-plane of the canvas. The coloration of the layer's top/bottom extents also will change from green, when within the top/bottom of the canvas, to red, when above or below the the canvas. This should help users quickly understand the positioning and scaling of their layers relative to the canvas more so than was the case prior to v1.40a.

Above is a GIF demonstrating how pre-v1.40a layer sizing behavior allowed the layer origin to shift away once the layer's size had been reduced to zero, if the user continued dragging the sizing handle of the layer "into the negative". If the user happened to release the layer handle when its size was reduced to zero like this it would result in the layer getting "stuck" with a dimension of zero. This could be manually rectified via the layer's properties on the UI's right-panel by just typing in a new non-zero value for the stuck dimension. v1.40a now simply prevents users from both sliding a layer's origin around when they drag the layer to a size of zero, and also pops the layer back out upon release to the current grid subdivision as a minimum value.

PixelCNC's timing code, which is used for both clamping framerate and keeping track of logfile timestamps, would gradually lose precision the longer that it was left running on the system. This would begin to cause some erratic behavior, including causing the framerate to slowly dwindle down. Within just a few hours the framerate (when clamp-framerate is enabled via the View Settings dialog - as it should be if users wish to maximize performance of computation-intensive functionality!) would drop into the upper 50s and continue dropping by a few frames per-second every several hours. PixelCNC should now be able to run for months and months, if not years, without any of these issues causing problems.

This update comes with a number of other fixes - issues which caused crashes, errors, and several which were just a nuisance or inconvenience insofar as usability of the interface itself is concerned. Most of these were a bit spur-of-the-moment, as many of the fixes across all PixelCNC versions have been. There are always some planned fixes with each update but many of these fixes are the result of bugs which are stumbled upon by accident.

There have also been quite a number of UI changes, many which aren't even listed in the changes.txt simply because they were decidedly unplanned and occurred purely as the result of taking some time to experiment with things. I hope that the end result is more appealing to everyone than previous versions' were. Anyone who has any suggestions/feedback please do not hesitate to share with us either in a comment on a devlog post, or on the PixelCNC community forums. Every little bit helps!

There are a lot of things left on the todo list, and not all of them will necessarily find their way into v1.41a, if any version at all. It's a question of time budgeting. The goal for now is to get PixelCNC into its beta phase of development before summer 2020, which means implementing all of the major features and leaving most of the polishing work for afterward. In the meantime, there are the things that I feel are important for the immediate future: