Lots of snow happening in the California mountains over here. Our apple tree snapped in half and the power was out a few times over the last two weeks. Good times!

Rest-machining is an experimental new feature which will cull from a freshly generating operation's toolpath cuts which travel through material removed by previous operations. There are still some kinks to work out but with some fiddling it can dramatically reduce machining time and also simplify the process of getting an operation's toolpath to be more efficient. This feature may or may not be of much use to users, depending on what their needs are.

This somewhat exaggerated example above shows a project with a horizontal milling operation for roughing out the project and then a parallel operation that follows in smaller cut-depth increments. The view is of an area of the project in simulation mode, with the parallel operation selected (so its toolpath is visible), showing the material that remains after the preceding horizontal roughing operation. It's a little hard to see without being able to shift the perspective and observe the multiple layers of cuts but in the left image many of them just travel through empty space that's leftover by the roughing operation. On the right side 'rest-machining' has been enabled for the exact same operation (along with the cut linking and sorting options). You can see how cuts are confined to areas where there's actually material to be cut.

Enabling the 'Distance Sort' option on an operation will sort cuts of a logical group of cuts so that each cut is succeeded by the next nearest cut - with some variation in the metric that specifies cut distance depending on operation cut direction. This reduces the overall travel distance spent rapiding between cuts, which reduces overall run time on a machine. This is not to say that the resulting toolpath will have its cuts in the absolute shortest possible ordering, just that they will be ordered in a way that approximates an optimal ordering and reducing the total run time significantly for some operations' toolpaths.

It's very easy for an operation's cut path generation algorithm to just spew out cuts in a seemingly random order. This order is actually specific to the triangle mesh hierarchy from which the contours for cuts is organized, and therefore is not conducive to preventing toolpaths that are 'randomly' organized, at best. The new distance sorting option performs a secondary sorting pass on the generated cuts in an effort to mitigate the effectively-random ordering in which they are generated.

In the above example, a simple v-carving, the left shows the ordering of the cuts as PixelCNC would normally output them. All those green lines are the rapid motions between cuts, which it's clear are not ordered worst-case (which would be each cut being followed by the next farthest cut) and instead are ordered somewhere in-between totally optimal and totally non-optimal. On the right is the same v-carving operation with 'Distance Sort' enabled before generating the toolpath. Now the tool will meander around, finding the next nearest cut after each one. This can lead to long rapids when the algorithm 'corners' itself far away from the remaining cuts, but overall ends up wasting a lot less time cutting air in most cases.

In this distance sorting example we've a parallel toolpath with a mixed cutting direction, so the tool is just alternating directions back and forth to eliminate the need to rapid back to the starting side and resume cutting. Simultaneously we've also a small minimum cut depth so that the tool's not dragging across the top of our material, thus all the rapid moves above the workpiece between the actual cuts. This is a lot of cutting-air, especially for an operation that allows for mixing cutting directions. On the right we've enabled distance sorting and clearly this has reduced the total number and sum lengths of rapid moves to just a handful of them.

Now, there's still room for improving upon this, and it even works for non-mixed cutting directions - where the toolpath will make an effort to refrain from making large leaps across the workpiece and instead focus on areas of cuts that seem related. It's not perfect, but it should prove useful to those who wish to cut down their machining time.

This animated GIF demonstrates the cut-ordering that results for a climb-cut parallel milling operation, where the cutting direction is preserved. The toolpath comprises many smaller rapids - instead of many large ones with those that skip over the top surface of the project too. There's still some room for improving the selection of subsequent cuts, but the concept works and is of worthwhile utility. There is still a small issue at times when moving to a new group of cuts: the cutting direction for the initial cut may not be correct, so if your machine undergoes a significant amount of flex/torsion based on cutting direction you may wish to experiment with this feature before going ahead and tackling a large project with a big expensive piece of material.

Model importing was added to PixelCNC with v1.30a, but there was a bug involving the bit-depth of the rendered depthmap. For deep projects this would manifest as a terraced appearance on imported models.

In v1.30a this was not an issue of the image being generated being the wrong bit-depth. The OpenGL framebuffer object, and attached texture were all 32-bit floats. When creating the model import functionality I assumed that this would ensure smooth model depthmaps, but they were still coming out as you see on the left above. It was a bit of a head-scratcher, but the problem ended up being with OpenGL's fixed-function pipeline utilizing purely an 8-bit coordinate value when passed to the fragment shader. This just required manually creating a float in the vertex shader and passing it to the fragment shader to be output to the framebuffer.

Also, v1.31a adds a super-sampling option to the model import settings via the Config menu. The supersampling value on the model import settings dialog controls a multiplier value for the area of the image that the model's depth values are rasterized to. So for a model import image size of 1024 (and a model with a square aspect-ratio), with a super-sampling value of 4 this would double the dimensions of the rendered image to 2048x2048. The resulting image is then down-scaled with the proper filtering involved to average out all the pertinent pixels' contributions to the resulting image's pixels.

Here you can see the effect super-sampling has on the sharp edges, or 'cliffs', of the imported model. They're much smoother now.

The spiral carving operation now features XY adjustments for offsetting the center of the spiral toolpath itself, as a percentage of the project size. The percentage can range from -50 to +50, allowing displacement anywhere within the edges of the project. 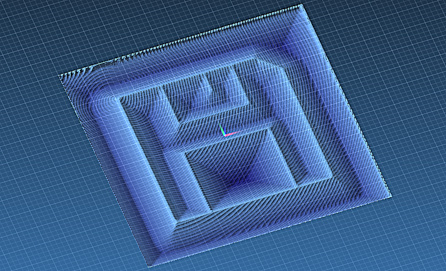 Would be nice if this would run on linux. loads on wine but complains "wglShareList failed". seems to run then but crashes often. also have found in windows that loading some images causes crashes. despite this, it looks like pixelcnc will be a very usefull tool at an excellent price.

Thanks! Your feedback is much appreciated :)

Running PixelCNC under any kind of Windows emulation or virtual machine, or via other operating systems, is not something that's currently supported at the moment. It should be run on a machine that's running Windows natively for maximum compatibility and performance. Some users have had varying levels of success running PixelCNC from other operating systems via Windows virtual-machine or emulation but that is beyond my purview.

The majority of PixelCNC is developed with cross-platform compatibility in mind but due to the extra work that would be involved in setting up to actually build, test, and release Linux/Mac versions the implementation of CAM features/functionality and bugfixes currently takes precedent among the list of priorities. Cross-platform support is definitely on the radar but it could be another year before that comes to be a reality. Ideally this would be something to tackle either toward the end of the alpha phase or in the beta phase - and we're about ~60% the way to beta. The next big feature coming down the pipe is the canvas system, which will allow users to load multiple images/models simultaneously into one project and position/scale/rotate/etc them as individual elements on a single 'canvas' off which toolpaths are generated. That will mark the transition to beta.

With that said, I'm curious what images you're trying to load into PixelCNC that are causing a crash. If you could email them to charlie@deftware.org we should be able to get that squared away pretty quick. :)

I can hardly wait to see the canvas system feature....I feel like I have to say something about those problems mentioned earlier....It's all working fine today! I tried the pics I was having trouble with last night and they load fine. I don't know why they weren't working last night. I am still learning how to use Pixelcnc so maybe I did something wrong.

Dang! I'm always eager to hunt down bugs and issues like that to maximize reliability for everyone. If you manage to figure out how to re-create the problem, or any problem for that matter, let me know so I can chase down the problem. Right now I'm tackling the cut engage/entry modes that I've had planned for the last 6 months or so - both ramping down into a cut and also helically into pocketing/horizontal-milling cuts too. These new cut engage types will be limited to certain toolpath types as you can't always ramp into a cut if there's no way to get to it (i.e. material in the way that's not supposed to get cut). Especially when the user only wants the tool to cut in one specific direction, for instance. Then there's a few other little tidbits afterwards that I plan to get up and running before I dive into the canvas system. Stay tuned!